You’ve likely witnessed this construction process firsthand without realizing it. But if your company’s in the market for a new commercial facility, you should know about this cost-effective and energy-efficient construction option.

We’ll talk all about its pros and cons below.

What Is Tilt-Up Concrete?

While it’s a relatively new concept as far as construction innovation goes, tilt-up concrete continues to make waves in the commercial building industry. In fact, the Tilt-Up Concrete Association (TCA) estimates that 650 million square feet worth of tilt-up buildings pop up each year.

You can probably guess why!

They’re also notoriously large, sometimes offering over a million square feet of floor space and standing as high as 96-feet tall (maxing out at about seven stories).

We’ll talk more about the pros and cons of these tilt-up panels soon. But first, let’s discuss the tilt-up construction process — the inspiration behind this method’s name.

We offer commercial construction services in the Colorado area. Click the link to get a job quote, and we’ll be in touch within a day! 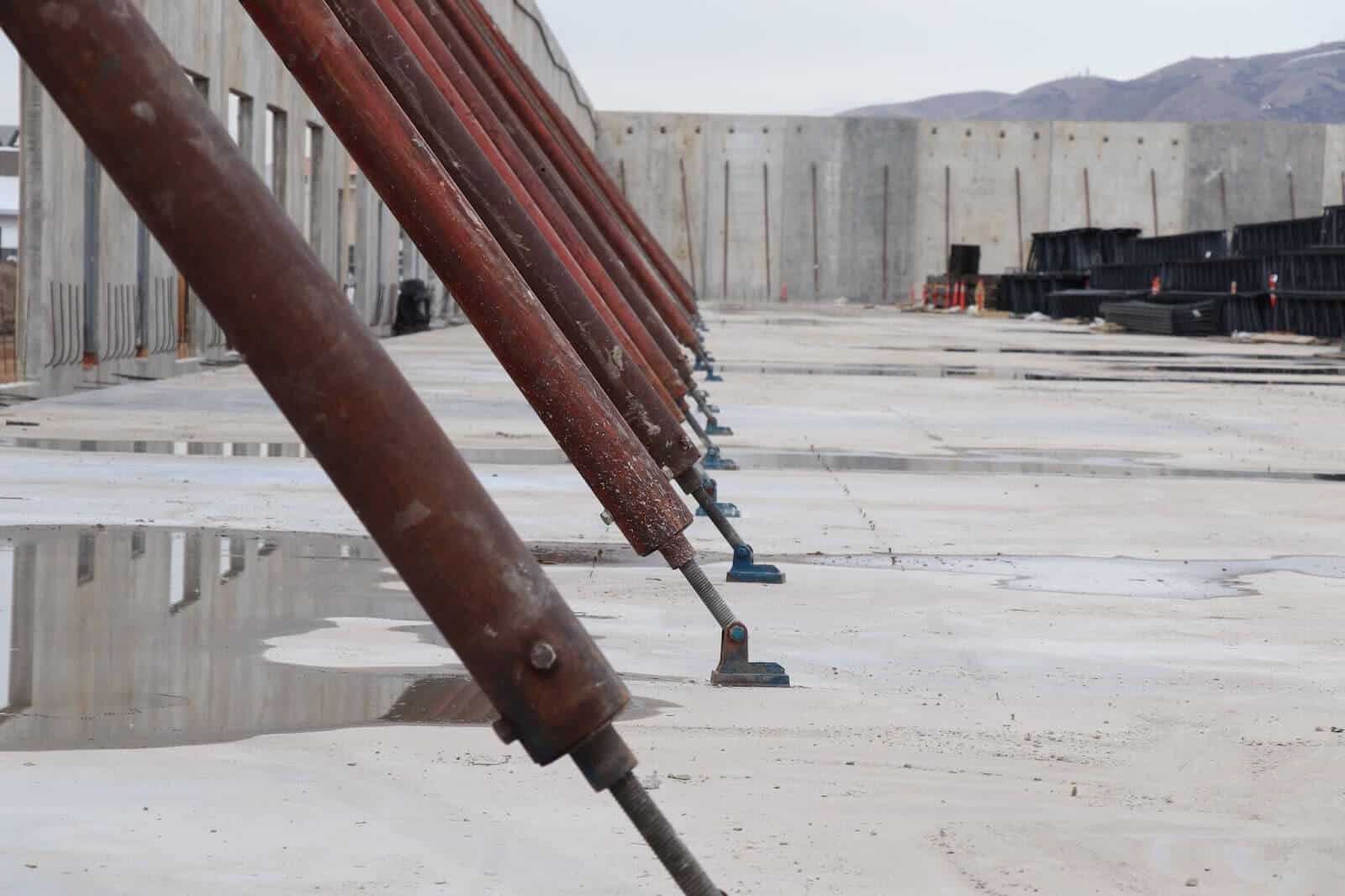 At its simplest, tilt-up construction involves “tilting” pre-poured concrete slabs into a vertical position to create the load-bearing exterior walls of a structure.

First comes the pouring of the floor slab, which also doubles as a casting surface when the wall panels are eventually poured.

The crew lays out a lumber outline on the floor slab to create a mold for the wall panels (including openings for windows and doors).

Before pouring begins, workers lay rebar — reinforcing steel bars — in a grid pattern to add strength and prevent shrinkage. They also add “inserts” and “embeds” that’ll help with the tilting later on.

Workers spray bond-breakers to keep the wall panels and floor slab from sticking together.

The on-site crew pours concrete into the mold and allows the concrete to cure for 7–10 days.

Once the concrete cures, the crew removes the mold (or forms) and attaches the inserts to the crane with cables.

The crane operator carefully pulls the panels up into a vertical position.

Workers temporarily install braces to prop the panels up from the slab before releasing the panel from the crane. They guide the embeds into the “footing” — narrow slots around the floor slab that support the walls.

After repeating the process for all necessary wall panels, the crew joins the walls together with caulk.

After attaching the roof and joining the walls and roof together, the workers remove the braces.

The tilt-up portion is officially complete!

From there, it’s time for customization. Your construction team will hang light fixtures, pave the parking lot, and turn your concrete box into a business-ready building.

A Brief History of Tilt-Up Concrete

The tilt-up construction method is over a hundred years in the making. The first tilt-up building dates back to the turn of the 20th century, around 1905.

Architect and contractor Robert Aiken used the method to build retaining walls at Camp Logan Rifle Range, an idea that would revolutionize the construction industry as the world knew it. Aiken’s new method relied on a tilting steel table to turn poured concrete into vertical tilt-up wall panels.

Within a few years, world-renowned inventor Thomas Edison would recognize tilt-up concrete as the future of construction, using the technique to build several villages around New Jersey.

Yet, it wasn’t until the invention of the mobile crane and ready-mix concrete nearly four decades later that tilt-up concrete started picking up steam.

The craze spread nationwide over the next half-century. Tilt-up buildings proved nearly invincible to earthquakes in California, and the advancement of the construction industry allowed these simplistic structures to take on more customized tones. 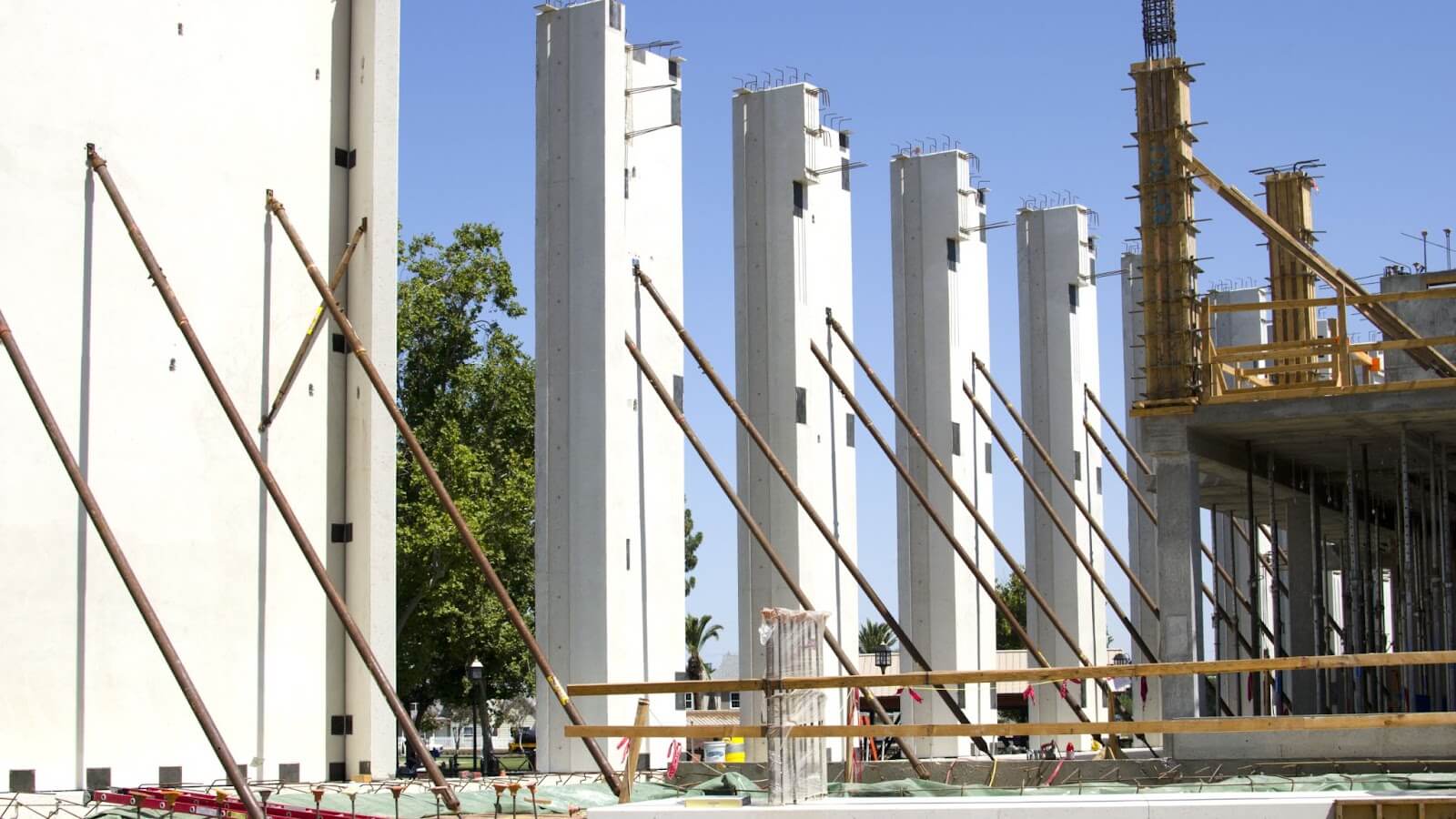 Here’s a list of benefits that explains why this method has gained so much traction:

Concrete is largely considered one of the “greenest” building materials, a top concern for corporations redefining themselves as sustainable.

Yet, as a business leader, it’s that coveted LEED score that matters most. Concrete’s light color, recyclability, and energy efficiency all lend to more LEED credit opportunities on the journey to becoming “green.”

While certainly not invincible, tilt-up concrete is one of the most durable building materials for large-scale structures.

First, concrete is resilient against insects and extreme weather (heavy winds, hail, and even earthquakes). These buildings are also resistant to corrosion, fire, and minor damages that can lead to costly repairs.

The thick concrete walls also add a sense of soundproofing to the structure, a hot commodity for offices located in bustling cities.

The infused rebar in each panel only adds another layer of compressive strength to the structure, achieving a PSI of 2,500–3,500 after four weeks. This further prevents weather-related shrinkage and cracking, adding longevity to these buildings.

It’s no surprise that some of the first tilt-up buildings ever constructed still stand today!

The tilt-up method also happens to be one of the most affordable options, offering the cost savings that business owners love.

Because they require a smaller crew and less equipment, tilt-up warehouses and office buildings could cost as little as $6 per square foot.

In perfect conditions, the construction of a tilt-up building could take anywhere between two and six months. The site-cast process itself could take a matter of a few days or a week for larger buildings.

(For comparison, a 50,000-square-foot building constructed with a more traditional method could take closer to 6–8 months to complete.)

Aiding with the speed factor is the wide availability of concrete, a quick curing time of 4–10 days, and site-casting the panels (rather than arranging for delivery).

The method also allows for multi-tasking between disciplines. While the walls are being cast and tilted into place, the design stage is ongoing.

The main draw is that most of the tilt-up project occurs on-site, perfect for building in cities with heavy traffic and narrow streets.

As a result, there are fewer heavy-load deliveries and machinery transported to the job site.

We’ll be the first to admit that plain concrete panels, floors, and roofs are far from aesthetic when left au naturel. But when you design your own tilt-up building, there’s plenty of customization potential.

Here are some of the add-ons and components you can discuss with your project manager:

The tilt-up method remains the same from one building to the next. But when you hire an architect and a construction crew, that flings the door wide open to a structure that matches your business’s brand and goals.

From a financial perspective, tilt-up buildings are a great investment for companies looking to permanently plant themselves in a specific place.

These buildings require few repairs, are easy to maintain, and can last for more than a century without issue.

In the event of an accident, concrete walls can remain fire-resistant for hours. They’re also repairable if cracks, leaks, or spalling occur down the road.

Let’s talk about your commercial construction needs. Get a job quote now!

While it’s the most popular choice for warehouses and factories, tilt-up concrete isn’t always the best option for erecting commercial buildings.

Can’t Be Too Technical

While simplicity is one of the key benefits of tilt-up structures, it’s also one of their drawbacks. With four walls and a classic rectangular shape, tilt-up buildings carry a somewhat industrial look.

Not Ideal for Smaller Buildings

There’s nothing that says concrete tilt-up can’t work for small, <5,000 sq. ft buildings. In fact, Edison and Aiken used this method to erect small-scale buildings and houses over a hundred years ago.

The answer lies in the economical aspects. Renting cranes and other equipment rentals is expensive, and it’s a much better use of the project budget to erect a 50,000 square-foot building for a set rental price than a building one-tenth of the size.

Unlike prefabricated steel buildings, where many of the early steps occur in an off-site factory, the progress of a tilt-up concrete construction job almost wholly depends on the conditions at the job site.

Heavy winds (20+ mph) could delay the crane-tilting portion of the project indefinitely. Severe rain and snow can also complicate the job, mainly the usability and eventual strength of the concrete. Pooling water, the potential for pitting, and decreased strength can all impact curing or still-wet concrete.

Cold weather is another known menace and can affect tilt-up construction in the winter and fall. Because concrete requires heat (65–85 degrees) to cure, the crew may need insulating blankets ready on chillier days to prevent the heat from escaping.

Progress may halt until the weather clears up and the job site dries out.

Why Tilt-Up Concrete Is Safer Than Other Options 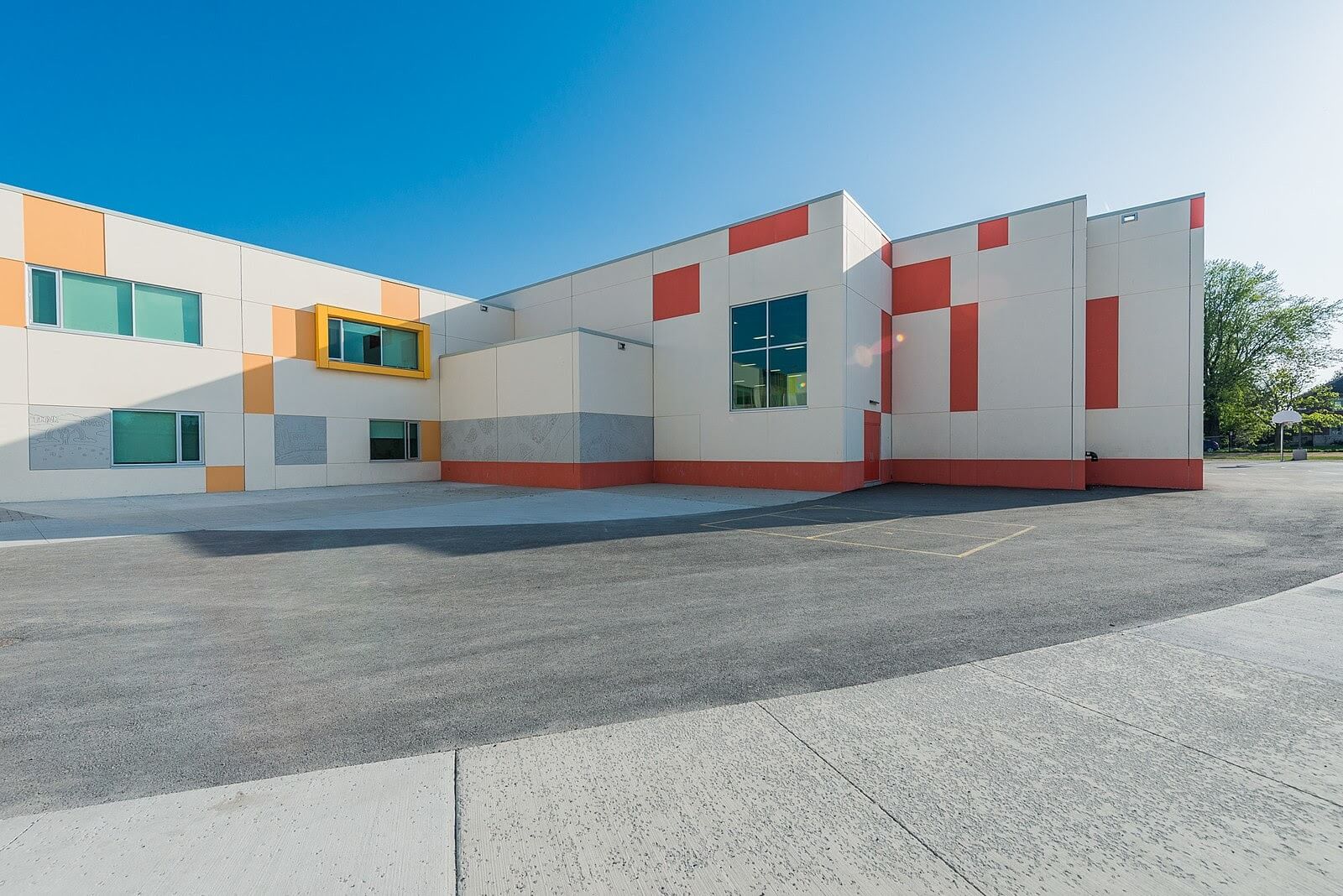 We already discussed seven of the driving factors behind tilt-up concrete’s popularity.

But one “pro” deserving of its own section is the safety factor.

They Can Survive Earthquakes

No structure is 100% invincible to Mother Nature, including tilt-ups.

While tilt-up structures became popular on the West Coast after World War II, the location delivered a rude awakening. The 1971 Sylmar Earthquake exposed the structural flaws in tilt-up buildings. The 6.5-magnitude quake detached concrete walls and roofs and led to partial building collapses.

The 1994 Northridge Earthquake was just as catastrophic for nearby concrete structures. Yet, updates to local building codes after the 1971 quake called for stronger attachments between tilt-up walls and their roofs.

New tilt-ups on the West Coast are now built to these standards, and tilt-ups pre-dating the regulations are being retrofitted for seismic survival.

Tilt-ups today are now much safer than they were decades ago.

During the Christchurch earthquakes in New Zealand, there were no reported panel collapses in tilt-up structures. Those that did suffer damage had either minor spalling or exterior cosmetic blemishes.

One of the most crucial safety measures in tilt-up concrete is the grid-patterned rebar in every wall panel. These thick steel rods add to the panel’s tensile strength to prevent weather-related shrinkage.

Without this internal steel reinforcement, the concrete walls may collapse.

It Abides By the ACI’s Building Codes

In the construction industry, we call these guidelines “ACI 318.” Every three years, the ACI republishes 318 with new and updated guidelines to enhance building safety.

Here are some other articles you might find helpful as you’re designing your commercial construction project:

Concrete construction — particularly the tilt-up method — is one of the simplest in the entire industry.

It’s also one of the cheapest, quickest, and safest ways to build a 5,000-square-foot commercial building in a matter of a few months.