We depend on roofs to keep everything inside of our buildings as dry, warm, and damage-free as possible.

But in regions that get a lot of snow, the choice in roof design and style becomes even more important.

Because a roof’s snow load and structure can mean the difference between a leak-free winter and a partial roof collapse or bowed trusses.

Learn more about snow load and large commercial roofs below.

1. What Is Snow Load?
2. How to Calculate Snow Load
3. Snow Load and Roofing Design Choices
4. What If You Choose the Wrong Roof?

What Is Snow Load?

Snow load is the pressure or force put on a building’s roof caused by a pile-up of snow or ice.

Since snow and ice melt when temperatures climb above 32 degrees, snow load is a temporary type of load — or a “live load” (versus a permanent “dead load,” like beams and drywall).

The term is used in the construction industry to describe the amount of pressure a roof can hold without any damage. We measure a roof’s snow load in pounds per square foot (or PSF).

We’ll talk more about how to calculate snow load in the next section.

But, for now, let’s briefly discuss the biggest factor influencing how much snow a roof can support: snow density.

If you’ve ever driven down an unplowed backroad or built a snowman, you know that snow can take on several forms despite looking the same.

Some snow is powdery and light, while other snow is wet and compact.

All of these characteristics can determine snow’s density.

The more mass per cubic square foot, the more force applied to that section of roof, and the stronger the roof must be to avoid collapsing or buckling beneath the weight.

The table below shows how snow type impacts density:

A 12-inch layer of wet snow on a roof would be 6.8 times heavier than a foot-high coating of damp, freshly fallen snow.

Note: If you’re looking for commercial construction services in Colorado, we’d love to help. Contact us, and we’ll design a roof for you that will hold up in the harsh winter months.

How to Calculate Snow Load

The simplest way to calculate snow load is to multiply the snow’s depth (in feet) by the weight of a cubic square foot of the snow (in pounds).

But this equation is best used to calculate the density of snow piled up on a flat surface.

It ignores how this load changes depending on the roof’s qualities:

The most accurate way to calculate snow load is with a snow load calculator that complies with two sets of guidelines: 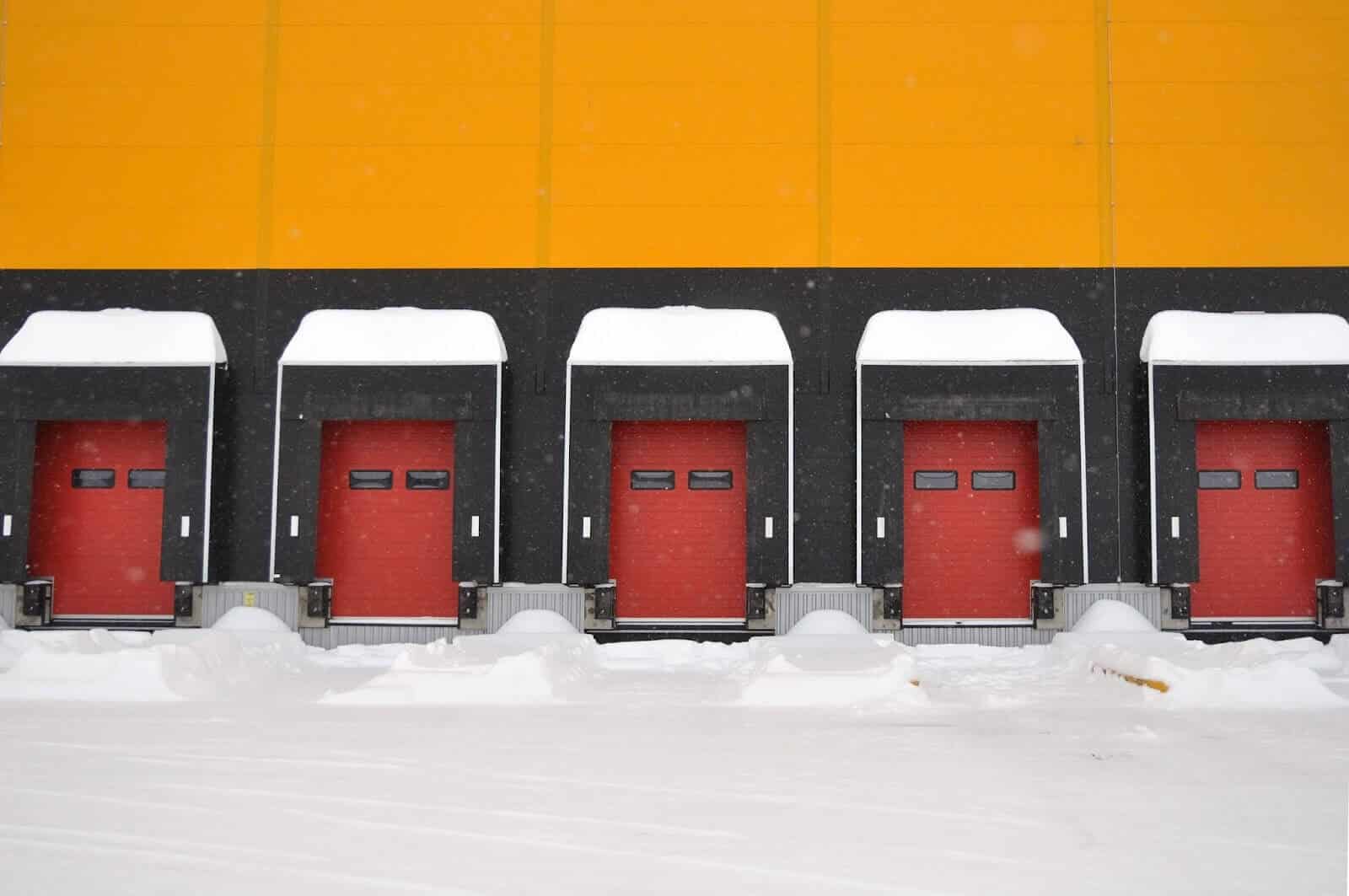 Short of changing locations, there’s little you can do to control how much snow your commercial building will see.

Not to mention, 28 U.S. states average 20+ inches of snow per year, with nine of those states breaking the 50-inch milestone.

What you can do is select a roof structure that’ll protect your building from the inevitable snowfall.

Here are some factors that affect your roof’s snow load:

Geographical Area and the Winter Season

Winter officially begins on December 21 and ends on March 20. Yet, snow can fall any day of the year in colder regions.

When designing your roof, consider these factors:

None of these factors are 100% predictable. That’s why structural engineers and construction companies look at the area’s ground snow load when determining a roof’s design snow load.

This location and elevation-based guideline carries a minimal 2% risk of being exceeded in an average year. That brings the risk of snow-related roof damage to a twice-in-a-century phenomenon (statistically, at least).

The ASCE simplifies this concept with ground snow load maps for the entire country.

The “pitch” describes how steep or slanted a roof is between its ridge or peak and its eaves (the point that connects the roof to the building).

We measure a roof’s slope in a rise-over-run format. For example, if a roof has a 4:12 pitch, it extends four inches higher for every 12 inches it spans.

According to FEMA, a subtle 10-degree pitch — or 2:12 — can significantly reduce the snow accumulation on a building’s roof.

On the other hand, an ultra-steep pitch can shuck sheets of snow off the roof at dangerous speeds.

Pitched roofs are typically the best option for naturally clearing a roof of snow and water. Unlike flat roofs, pitched roofs are sloped on either side and meet at a central point at the peak (called the ridge).

Two of the more popular roof styles for snow are gable and hip.

Gable roofs are the classic pitched roof with steep angles that support snow-shedding.

Hip roofs are similar to gable roofs but include four sides meeting at the peak (versus a gable’s two) and can support heavier loads.

A roof’s material can impact how much snow it can handle and how well it repels precipitation. Unfortunately, the classic asphalt roof is no match for brutal winters with heavy snowfall.

That brings us to a fundamental question: which roofing material is best for large commercial structures in snow country?

In most instances, the answer is “metal.”

They’re also smoother, wick away snow before it becomes packed-down, and come with twice-as-long warranties (30 vs. 15 years).

The particular style of metal roofing also plays a role in how well it withstands rough winters.

For example, standing seam metal roofs don’t have any fastener holes, which lessens the risk of water leaking into the vapor barrier. They also have vertical ridges that act as a clear pathway for snow and water.

Another question worth asking in the design process is one that many business owners overlook:

“Should we add snow guards to the budget?”

Snow guards prevent sudden snow avalanches when it begins to melt, and they’re a popular add-on for commercial metal roofs.

These metal bars positioned along the roof allow it to shed ice and snow in smaller, safer amounts.

Without snow guards to “catch” these sheets, several inches of snow and ice may fall on an unsuspecting passerby’s head. Or, it can crash down onto a lower roof, with the force of gravity ramping up the impact to cause damage.

So far, we’ve concluded that steep, pitched, metal roofs with snow guards are the most efficient and reliable roofs in snow country.

However, commercial roof obstructions can block the pathway of this snow, slowing removal and increasing the pressure on the roof.

Obstructions are any object, equipment, or protrusion that creates an unbalanced snow load on the roof and prevents sliding.

Here are some examples:

When the snow begins to melt and shift or the snow drifts from wind gusts, the snow piles up even higher against these obstructions.

Roofs that encourage snow to melt also prevent ice dam formation — caused by snow that melts and refreezes lower down on the roof.

Heated panels are popular add-ons for keeping roofs clear of snow and de-iced.

Like radiant floor heating, these panels use a boiler or heat pump to warm a chemical mixture that’s then pumped through the tubing. It gently warms the snow and ice on the roof, forcing it to melt.

Many modern heated roof panel systems are automated and detect cold temperatures and snow on the roof.

What If You Choose the Wrong Roof? 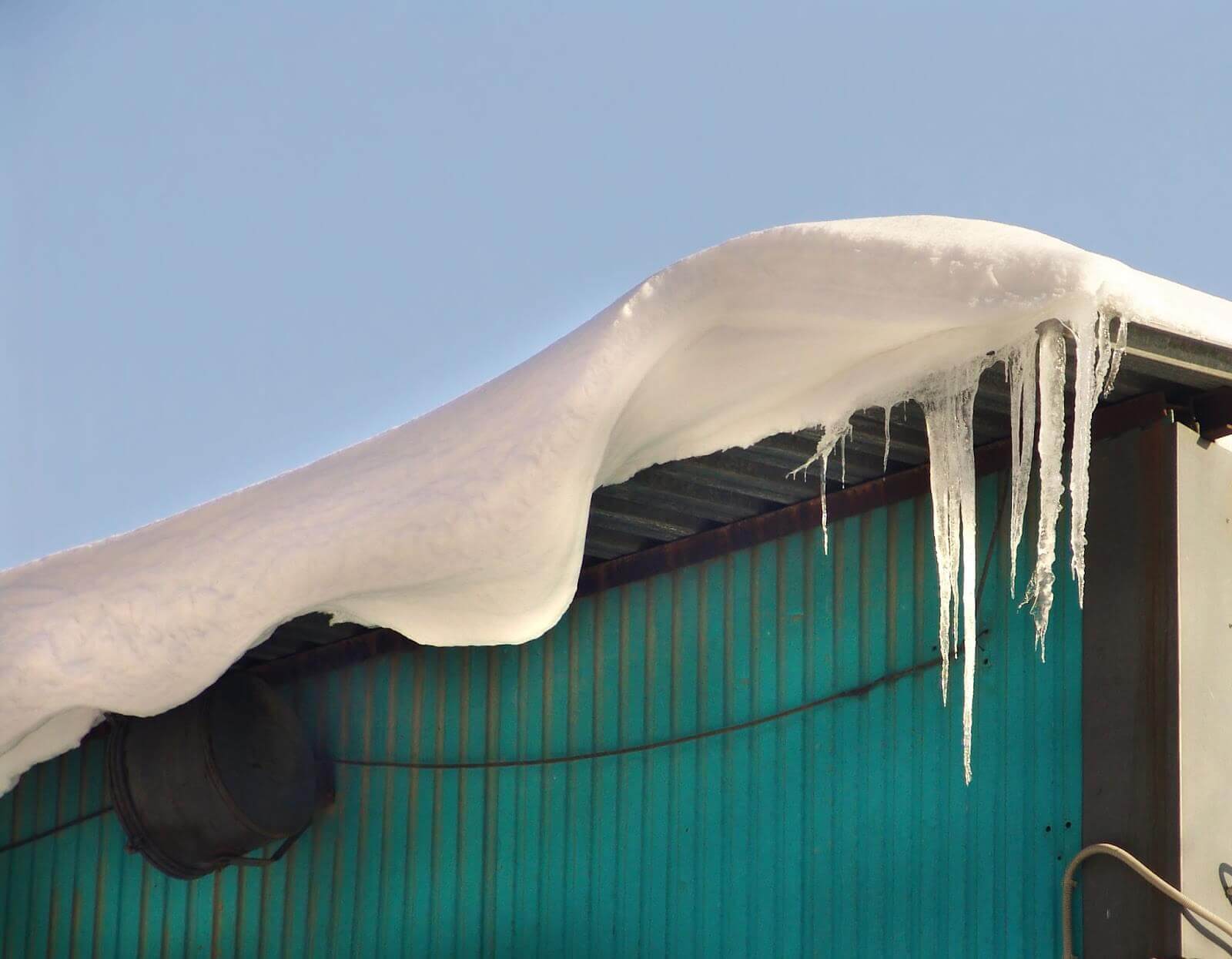 Your commercial construction team will walk you through the building process and help you choose the features and customizations right for your build.

However, it’s not unusual for business owners to want more creative liberty when designing their next factory, distribution center, or retail store.

But here’s what can happen if you ignore snow load requirements and choose aesthetics over practicality:

As we mentioned earlier, the wetter and more compact the snow, the more pressure it puts on your roof and the framing members beneath it.

The longer this snow sits on the roof, the more likely your building is to suffer severe structural damage due to the weight of snow.

Heavy snow loads can weaken or even collapse the trusses forming the roof’s structure. This can evolve into several structural issues, such as a sagging or bowed roof (also called “deflection”) or cracked ceilings.

In severe cases, a section of the roof may fail entirely and collapse.

Related: Can You Customize a Prefabricated Building?

While leaks and water pooling sound far less costly and dangerous than a collapsed roof, they bring along their own set of issues.

Large amounts of accumulated snow can force water to become trapped behind ice dams. That, plus a lack of proper roof drainage and no snow removal could allow this water to seep below the roof.

The leaks can then wreak havoc on everything below roof level. That includes the vapor barrier, insulation, attic, and framing.

Prolonged water damage can lead to costly repairs and further weaken the structure of your building.

From a logical standpoint, being strategic about your roof’s structural design will add to your building’s lifespan, prevent unnecessary repairs, and enhance the safety of those who work in and visit your facility.

However, a poorly chosen design can also impact your company’s bottom line.

Here are seven more business-centric reasons to trust the experts’ opinion when designing your building’s roof:

Not to mention, most states and local governments have strict building codes relating to snow load and roof design.

If structural engineers and your construction team are shaking their heads, there’s a good reason!

Snow load is one of those things that very few business owners consider when designing a brand new commercial structure.

Yet, it’s also one of the most important concepts to understand if you want to avoid structural damage and repairs.

Make sure you choose a snow load that’s in line with the snow load map and matches the local weather trends. For even more peace of mind, invest in snow guards and heated roof panels to keep your roof clear of ice dams and avalanches at a minimum.

If you haven’t yet hired a contractor or project manager but you’re looking for one in Colorado, contact us today.