Double-skin facades, storefronts, and curtain walls create the illusion that an entire structure is made of glass.

But building fronts aren’t only aesthetic.

These three popular facade configurations play a role in everything from sound insulation and airflow to climate control and sustainability.

So what are the pros and cons of each?

And which building front style is best for your company’s next build?

Read on to find out!

A double-skin facade — or DSF — is a two-layered facade system with an air cavity sandwiched between two glass panels.

DSFs can be seen in skyscraper office buildings and high-rise buildings around the world. Examples of this breathtaking building design phenomenon include Cube Berlin in Germany and The Gherkin in England.

Let’s talk more about how these building envelopes work and their benefits.

There are three basic parts to a double-skin facade system:

The first and most important is the exterior panel. This outer glass skin is the outermost portion of the building and shields the interior from wind gusts and extreme temperatures. Exterior panels are sheets of thick safety glass reinforced with glazing that block solar heat while allowing natural light through.

Next is the internal air cavity. This 1-to-50-inch gap between the exterior and interior skins allows ventilation and airflow. (We’ll talk more about how this air buffer doubles as an insulator in the next section.)

The final component of a DSF is the inner panel. This is the innermost sheet of durable glass, often treated with a low-E (or low-emittance) coating. This layer blocks the sun’s UV rays and radiant heat rather than absorbing them.

From an architectural and engineering perspective, DSFs are both aesthetic and practical.

But how do these “breathable” building facades actually work?

That depends on whether your building is in a cold or hot climate and the facade’s ventilation system.

In colder regions, the air within the gap remains trapped. As the sun beats down on the exterior pane, it absorbs some heat, which heats the air in the gap. This hot air creates a warm buffer between two skins, preventing the outdoor cold from entering and the interior warmth from escaping.

In hotter areas of the country, these double glass facades act more as vents. The air within the inner cavity becomes heated when exposed to sunlight and the hot outdoor air temperature.

But, instead of the inner pane absorbing that heat, the heat rises and escapes through the top of the facade (with the “chimney effect” or “stack effect”).

This heat escape can occur naturally through ventilation or mechanically with the help of fans. As this heated air is pushed out, cooler air enters the cavity to cool the building.

Many DSFs also have sun-shading devices to block direct sunlight, such as blinds, louvers, or shades, between the two building skins.

The biggest benefit of double-skin facades is the energy-efficient edge they provide in all climates.

A case study from 2021 shows that DSFs can reduce a building’s cooling energy consumption by up to 22% in hotter climates (like the UAE, the focus of the study).

This energy savings climbs to 32% with fans added into the mix.

The chimney effect in the summer and trapped air in the winter reduce the strain on your building’s HVAC systems year-round. The less your company relies on the air conditioning or heating, the “greener” your building becomes.

The energy savings make DSFs an excellent investment for multi-story commercial buildings with a high square footage and high heating and cooling costs.

However, the upfront costs of these facades are also quite high. Not to mention, cleaning and maintaining the air cavity could require specialized cleaning crews, which could add to the total cost.

Want to reduce your company’s carbon footprint but don’t have the funding for a double-skin facade?

There is an alternative:

DSFs are a popular retrofit option for commercial buildings with single-skin facades.

While a DSF’s two layers of glass create a high-performance facade system leaning on advancements in the building design process, they also come with a few structural limitations.

The biggest concern is the width of the air gap — which could be up to five feet.

For commercial buildings on smaller lots, where every square foot matters, DSFs can seriously limit the interior space potential. If a building is 100 x 100 with a 5-foot gap, the cavity becomes a “waste” of hundreds of square feet.

The air gap also interconnects all levels of the building to encourage natural ventilation between the outer skin and inner layer.

But, this free-flowing air can quickly become a safety concern in the case of a fire. The flames and smoke could spread more rapidly and engulf several floors before help arrives.

Generally, double-skin facades are a great option for companies with higher construction budgets and green business initiatives that include improved energy performance.

FMP provides commercial construction services in Colorado. Call us if you’re looking for a new building for your company. 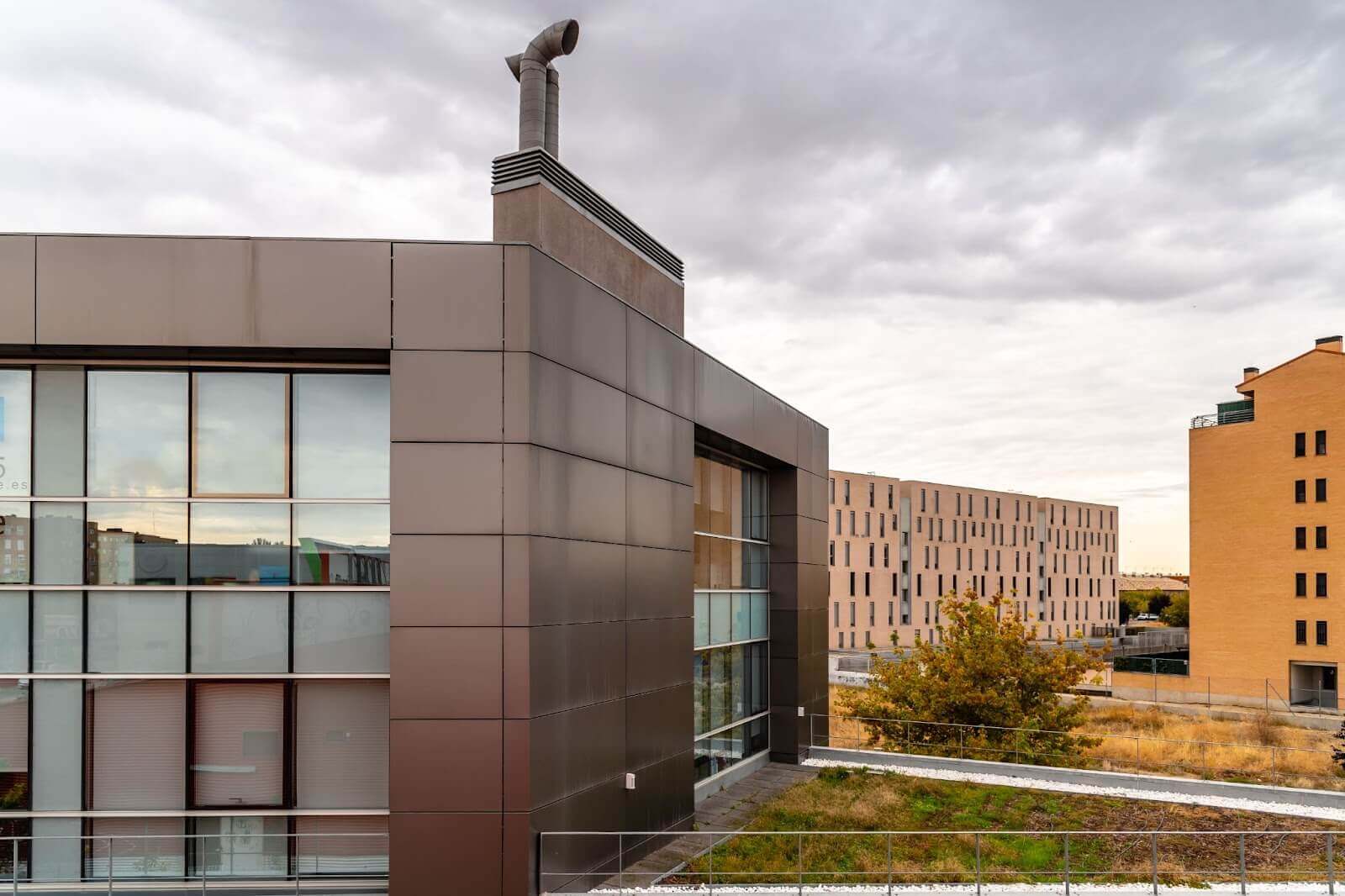 (Note: The keyword there is typically.)

Common in busy areas like Times Square in New York or Rodeo Drive in Los Angeles, storefronts give shoppers a clear view of a store’s interior.

Yet, this glazing system is also a popular and inviting alternative for office lobbies, banks, convenience stores, and recreational center entryways.

Below, we’ll discuss the finer details of storefronts in the commercial world.

First up, we have a storefront’s insulated glass panels. The storefront system’s windows usually peak at around ten feet tall, 4 ½ inches thick, and 24–96 inches wide per panel.

The second feature is what holds these glass panels upright: the framing. Although some construction companies offer higher-gauge steel or even wooden framing, most storefronts use lightweight and corrosion-resistant aluminum.

The classic storefront facade toes the line between “heavy-duty” and “easily breakable,” depending on its application.

These windows include two glass panels held apart on all four sides by spacers. These wedges create an air cavity between the layers that enhances the window’s moisture and temperature control (more on that later).

Aluminum, while one-third the weight of steel, is stronger than most people imagine. On top of being a durable metal for storefront framing, it’s also corrosion-resistant, protecting its integrity in humid or wetter regions.

The glass and framing might buckle against 74+ MPH gusts in areas where hurricane-force winds are expected. This rare bending or bowing could crack or shatter the glass panels and require extensive repairs.

The air trapped between the two glass sheets acts as a barrier between the inside of your building and the outdoors. In simpler terms, the windows prevent heat loss in the winter and limit heat transfer in the summer.

Yet, the traditional aluminum framework could work against these efforts. That’s because aluminum is known as a great heat conductor, meaning it transfers heat more efficiently.

Without a thermal break to separate the interior and exterior of the facade, the aluminum could reduce the building’s energy efficiency in the summer.

While storefronts are less versatile and limited to ground-level applications (or up to the third floor in rare cases), this brings a lower price tag. Storefronts are the most affordable building front option for both materials and labor.

One of the more common questions we hear about storefronts is the rain question:

Given the multiple-panel design and number of connections between windows and framing, how well does it handle precipitation?

For most storefronts, the answer is “considerably well.”

Storefront systems include some type of sealant at just about every possible connection (i.e., the sill, anchor, and all joints). Most also feature a water deflector that designates a path for any water to escape through the sill flashing.

For further protection from the elements and to limit leakage, installing a storefront facade below an overhang is a popular choice.

Structurally, storefronts are best for shorter window spans and first-floor applications, also being versatile enough to add shades or doors.

If you’re still not sold on the benefits of storefront systems, take a look at these undeniable perks:

In most cases, storefronts are best for smaller one-story shops or lobby areas in low-wind regions and for companies with lower budgets. 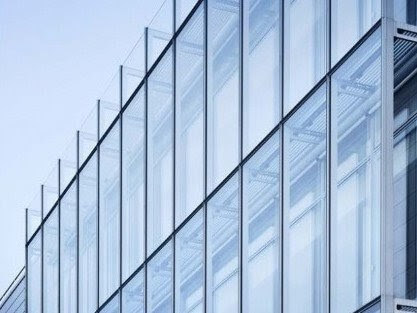 Curtain walls act as a lightweight outer shell for commercial structures like office buildings and warehouses, creating the illusion of a wall of windows.

Known as “non-structural cladding systems,” curtain walls don’t actually support the building’s weight like a traditional exterior wall would. Instead, they serve to protect occupants from the elements.

In what we call the “stick-built system,” curtain walls consist of three parts:

The first is the mullion, or the vertical aspect of the curtain wall frame. These aluminum framing tubes create half of the interlocking grid pattern that houses the individual panels.

The horizontal versions of vertical mullions are called transoms. These horizontal mullions create the remaining two edges of the individual pane “boxes” and connect the framework to each story’s floor slabs.

The final piece of the puzzle is the glass paneling that creates the windows. Most curtain walls are 6–10 inches thick and feature reflective glass coated with a chemical mixture to reflect solar heat and light.

The most fascinating aspect of these non-load-bearing walls is how they’re hung from the building structure.

In the stick-system, they’re anchored to the floor slabs and framing floor-by-floor, almost as if the construction crew is hanging a curtain made of glass (hence the name).

The installation process also includes a few extra steps to ensure durability and structural strength long-term. The crew secures the individual window panels with fasteners and seals joints with a sealant or caulk to lock out moisture and extreme temperatures.

Curtain wall systems aren’t the most energy-efficient option, nor will they support a single pound of the building’s weight. However, unlike other systems, curtain walls can give a building a more visually appealing edge.

The difference lies in the infills.

By infills, we mean the elements secured between transoms and mullions to create the wall illusion. The most common choice is glass, though louvers (or horizontal blinds) and metal panels are also available.

We attribute the higher price tag to the more labor-intensive installation process and the need for heavy machines like boom lifts and cranes.

Opting for unitized curtain walls over stick-built ones could cut labor costs due to the factory assembly of most of the components.

In the structural sense, curtain walls are a top choice for taller buildings where a storefront wouldn’t work (i.e., taller than 10–12 feet).

These framing systems are best for multi-story buildings over 25 feet tall. This exterior solution is also thicker than storefronts.

These aesthetic “window walls” aren’t always the most practical choice, but they do offer unmatched aesthetics and the following benefits:

Based on all of that, curtain walls are the best option for taller luxury buildings where being “green” matters less than surviving inclement weather.

Which Style Is Best?

Depending on your circumstances, budget, building needs, and other factors, any of these options could be the best one for you.

Are you still on the fence?

Here’s a quick breakdown to help you decide.

All three of these building fronts protect occupants from the elements, offer visibility, and are customizable to fit a company’s needs.

Which one is best for your future building?

Need help deciding? Call us or email us today!