As your commercial construction project transitions from an empty dirt lot to a fully functional building, one thing will become quite clear:

There’s a lot of confusing jargon!

Those weekly chats with your project management team could leave your head spinning as you turn to Google to make sense of the conversation.

This commercial construction glossary is your official cheat sheet.

General contractors and project managers drop tons of building-related lingo that even Google has trouble explaining. So this is your one-stop shop for architectural verbiage.

A mixture or fusion of metals or metallic elements. Alloys are known for being more malleable, corrosion-resistant, and stronger than standard metals. Examples include stainless steel, aluminum, and reinforcement steel.

The material or soil removed from a hole, ditch, or trench dug before laying a concrete slab or piping. Often used to fill the voids surrounding a freshly laid foundation.

A trim board nailed or glued to an interior wall at the junction of the wall and floor. Sometimes known as wainscoting or base molding.

A beam that lies perpendicular to joists. Bearing headers sit horizontally over doors and windows to better distribute the load to the exterior of the opening.

Small slabs of metal or wood secured centrally and diagonally between joists and rafters. Ties joists together to prevent twisting and to properly distribute loads between nearby joists.

A piece of wood or filler cut at a 45-degree angle, creating a slope between horizontal and vertical surfaces.

A beam with support on just one end. Cantilevers create a brace-free overhanging structure, such as when building bridges.

A flat and thick layer of concrete — often reinforced with wiring or mesh — used to create walls, ceilings, or floors in a structure.

Low-quality building materials — such as wood — with warping, degradation, or other defects.

Related: What to Look for in Commercial Construction

The simplest method for creating interior walls and ceilings. Drywall consists of paper backing on either side, gypsum on the interior, and a notable lack of mortar.

Tubing inside a structure. Acts as a fundamental part of a ventilation system to allow for controlled flow of air and exhaust. 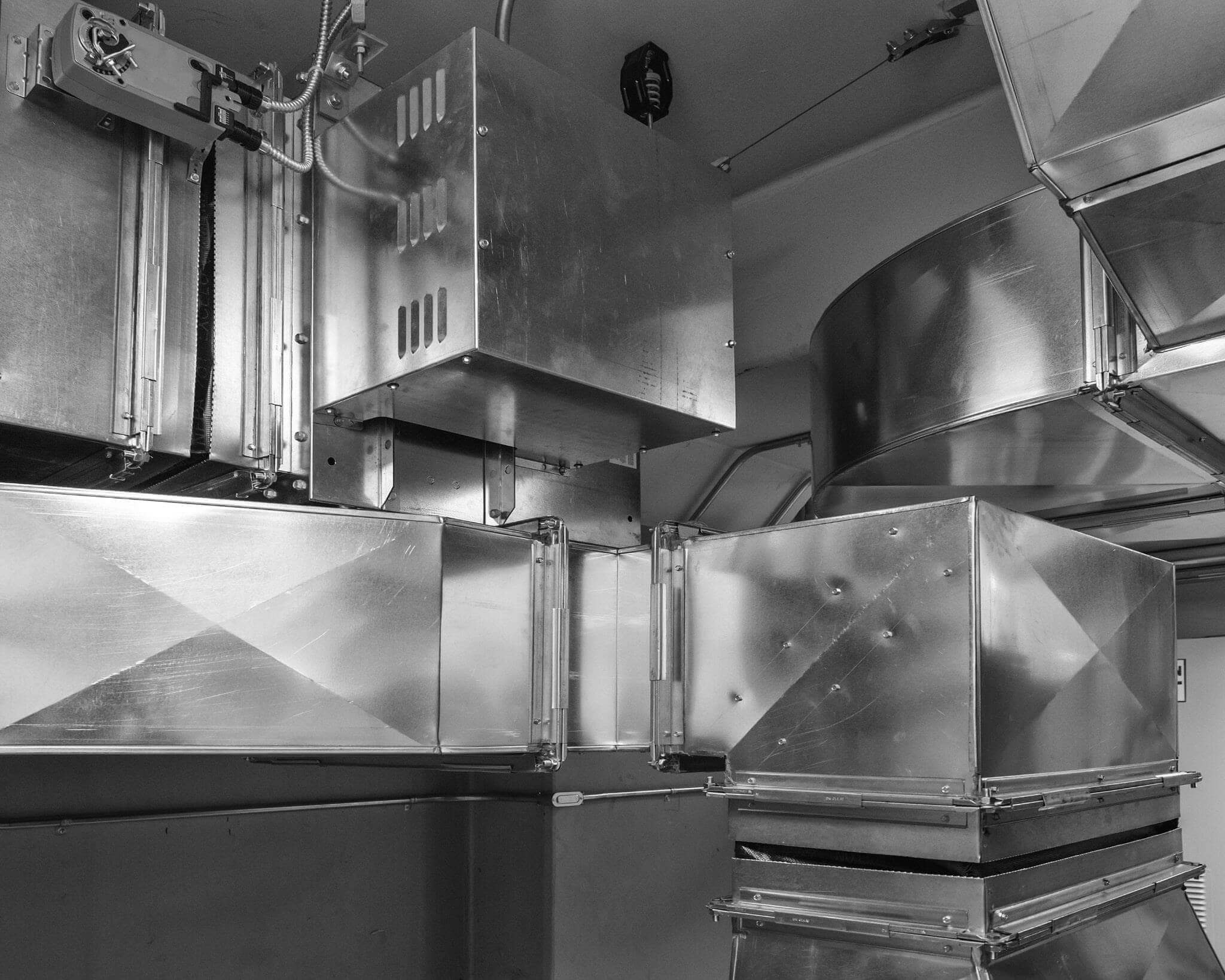 Roofing that hangs over the edge of a wall or fence, projecting from the side of a building to create a slight overhang.

Unobstructed areas in a structure that allow the public a free pathway to enter and exit.

A barrier or coating surrounding a construction element. Examples of encasements include enclosing piping in concrete or coverings for hazardous materials like asbestos.

Looking for a commercial contractor in the Colorado area? Click the link to fill out our estimate form — we’ll be in touch within a day!

A device installed in a structure that limits stress caused by movements within the structure. Expansion joints allow for shrinkage and expansion and protect a structure from sway and temperature changes.

A sheath-covered wall that supports a structure’s roof and creates a sturdy frame.

Tools that permanently join two objects together, such as bolts, screws, and nails.

A concrete wall attached to a foundation’s footing, designed to redistribute the load to the ground.

A long-span, horizontal interior beam that supports smaller beams within a structure.

The abbreviation for heating, ventilation, and air conditioning. HVAC systems support proper airflow in and out of structure while also controlling temperature via heating and cooling mechanisms.

Horizontal framing members, often made of wood or steel, that extend from one end of an open space to another. Joists run parallel and sit atop beams to provide stiffness to floors and redistribute loads to vertical beams on roofs.

A wall that transfers a structure’s load down to its foundation. Load-bearing walls are primarily responsible for supporting the weight of a structure’s roof or floor.

An extension of a structure that juts out beyond the exterior wall. Overhangs provide adequate shade and protection from inclement weather.

A wall or railing that borders a balcony, porch, roof, or deck to prevent people from falling over the edge.

Vertical wall supports that extend beyond a wall, sometimes resembling a half-pier.

A type of concrete prepared and cured off-site using a mold, commonly used to create pillars and retaining walls.

Horizontal beams or rails in a roof structure that run parallel to the eaves. Purlins offer extra support in long spans and secure the rafters together.

The sloped beams that form a roof’s frame, connecting the wall to the roof’s hip. Sometimes known as “stick framing.”

A type of steel coated with red iron oxide, giving it a reddish tint. This extra layer creates a barrier that protects the steel from corrosive elements like acid rain.

Further reading: Steel vs. Red Iron Buildings: Which Are Better?

A piece of framing that lies perpendicular to standard joists. Rim joists ensure lateral support by creating a complete perimeter around a section of flooring.

A horizontal beam that holds two structural elements together while preventing them from compressing. A common example is the base of a pitched roof linking side walls together.

A machine that passively transfers electrical energy between circuits at the same frequency. Delivers voltage to a structure.

A webbing of interconnected triangles made of wood or steel. Most often used to create long, single-object spans in roofing and towers.

There’s far more to the construction industry than building and demolition. You might encounter these words when talking to your project manager about the actual building process.

The process of modifying a commercial space before a tenant moves in. A build-out could involve the installation of shelving, carpets, or cubicles.

Manipulating steel and other building materials via bending and cutting to create panels, beams, columns, or trusses.

A method of installing underground pipes without digging a trench, burrowing a tunnel through the ground instead.

Upgrading or renovating a pre-existing structure to be more energy-efficient, tech-savvy, or modern.

Using metal or wood props (aka “shores”) to hold up a part of a structure during repair or to prevent collapse in a building under construction. 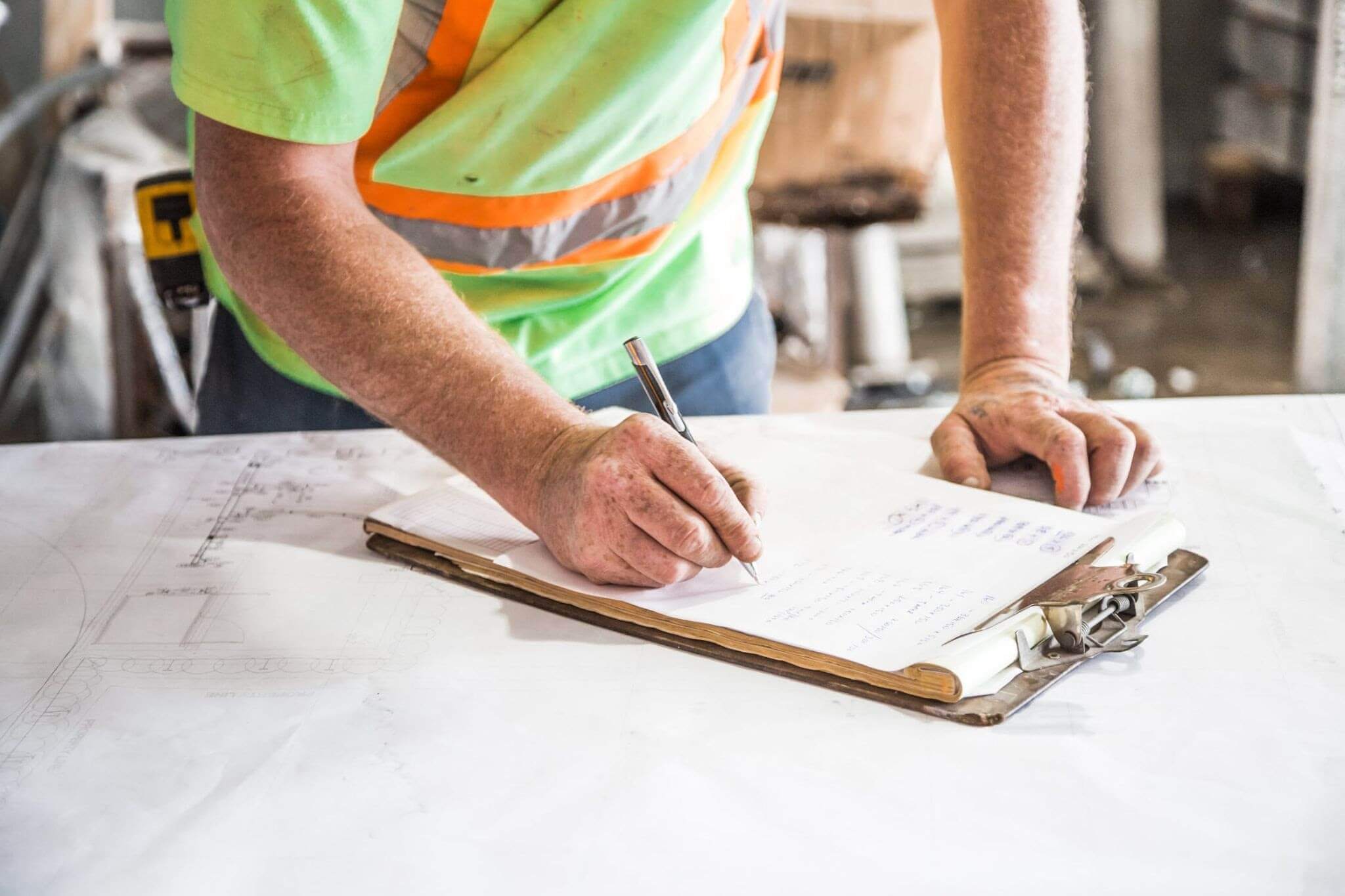 When you drive down to the construction site, everyone’s wearing a reflective vest and hard hats. Below, you’ll discover the “who’s who” of those coming and going.

The highly skilled leader of a construction crew who oversees operations at the job site.

A company or person who signs the primary contract with the construction project owner. General contractors oversee day-to-day operations and hire subcontractors to complete the project within the decided-upon budget and deadline.

A company or skilled worker hired during the course of a construction project, often on a contractual basis. Plumbers, electricians, carpenters, and roofers are all examples of subcontractors.

Who knew the construction industry required so much paperwork?

Learn more about contracts, project management, and documents below!

A modification to unsigned bidding or contract documents, often initiated by the owner.

An addenda can be an adjustment to the payment schedule, bid dates, or scope of work. Called “amendments” when added to previously signed documentation.

A charge shouldered by a subcontractor and filed by a general contractor to recoup losses caused by job site damage, OSHA-compliant clean-up, or improper work.

When an owner selects a winning bidder to head their construction project. In government projects, the lowest bid typically wins.

A process in which a project owner accepts proposals from general contracting firms willing to complete a project within a set timeline and budget. This process includes subcontractor bidding, negotiations, and contract signing.

A document prepared by a cost consultant and relied upon during the bidding process. A BOQ is an itemized list explaining the costs of labor, workmanship, and materials to compare bids with ease.

Official two-dimensional drawings designed by an architect or engineer to map out a construction project. Blueprints include precise dimensions and placement of windows, doors, appliances, and downspouts.

Insurance coverage for buildings currently under construction, often paid for by the general contractor. Offers financial protection in the case of fire, flooding, or theft on a job site.

An official amendment to a previously signed construction contract.

A scheduling procedure for construction projects that identifies critical and non-critical tasks, their dependencies, and how long each will take to finish.

A three-part construction process that progresses through three phases: design, bid, and build.

This is the traditional commercial route for those looking to cut costs throughout the project.

A commercial construction project that leans on a single contractor to both design and build a structure.

FMP will manage your project from the idea phase through the project’s completion. Learn more about our commercial construction services!

A right to use a particular piece of property or a lot to build.

A change to the contract initiated by the owner after the project has already begun.

An agreed-upon maximum fee that a project owner is willing to pay general contractors and subcontractors to complete a construction project.

The estimated period of time between placing an order with a supplier and receiving construction materials.

A non-payment claim placed on a property or structure by a builder, general contractor, or subcontractor. Construction liens are public record, make a property more challenging to sell, and may disqualify the property from future financing opportunities.

The initial phase of a construction project, during which the building’s location and basic design concepts are decided upon.

A list of tasks created in the final days of a project after an in-depth walkthrough. Details items that don’t meet contract specifications or aren’t yet complete, delaying the official completion of a project.

Documents transferred from a buyer to a seller outlining the specifics of a purchase. Purchase orders include the name, quantity, and prices of goods or materials.

A construction industry procedure that clarifies any gaps not specified in previously written documents. RFIs can reduce conflict between parties and ensure a project’s completion within a certain budget and timeline.

A document created by general contractors and subcontractors detailing the work items needed for a construction project.

Schedule of values documents include labor and material costs, map out a building’s progress, and explain what still needs to be done.

A written document in the construction industry describing the work a contractor or subcontractor will complete on a project.

Some words don’t fit into any of the above categories, but they’re still important to know!

Expand your construction-related knowledge by mastering the terms below. 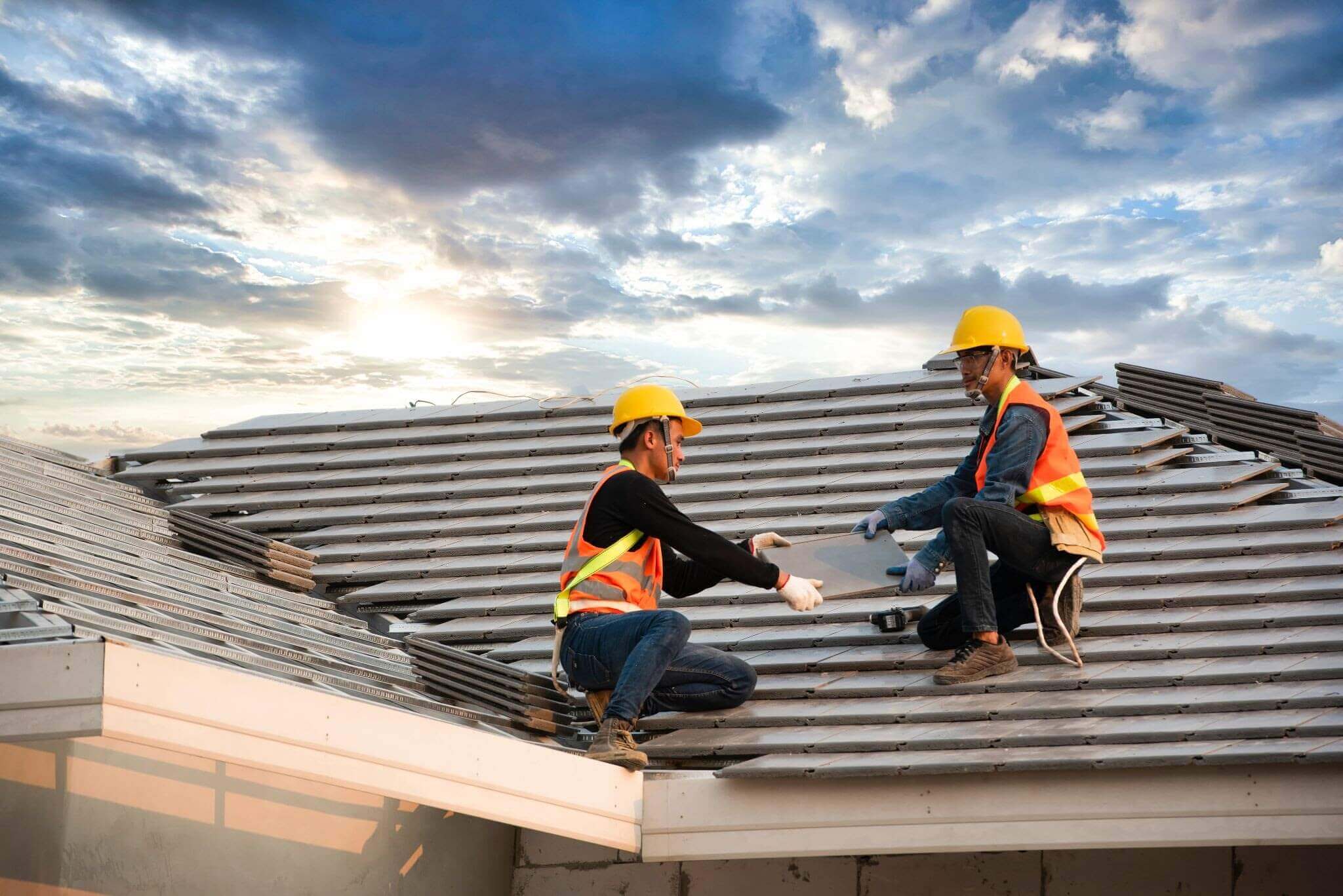 Local rules and regulations that determine the standards for structures in a given city or town. Commercial spaces “not up to code” may lead to financial consequences or a business’s temporary shutdown.

The natural degradation of elements after exposure to the environment, moisture, and chemicals.

The slope and elevation on a construction site.

A structure that’s “at grade” and level with the earth.

A structure intended to house or shelter people or animals.

The acronym for Occupational Safety and Health Administration, the organization that sets workplace safety standards across multiple industries, including construction. Intended to prevent on-the-job injuries and eliminate safety hazards from worksites.

Structures designed, manufactured, and assembled in a factory setting. Pre-engineered metal buildings (PEMBs) arrive ready-to-build and are easier to erect.

A unit of measure used to describe floor space and materials in American construction.

Short-term structures erected during a construction project to promote safety and efficiency for days, weeks, or months. Temporary structures include scaffolding, shoring, and decking.

Local laws that determine whether a given lot is residential, commercial, or industrial. May also limit how tall a building can be or how far it must be from the road (setback).

Now that you’ve mastered some of the most complex construction terms, you’re ready to tackle your company’s next big commercial project.

We’ll help you through every stage of the building process, from obtaining permits and planning your project to constructing the final product. Email us today with any questions or to get an estimate.

Learn about our services: