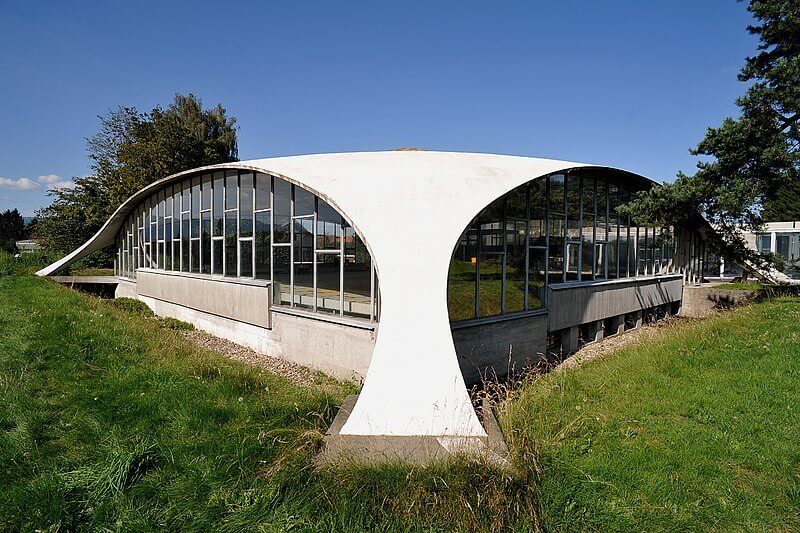 Due to the nature of the building process, most concrete structures are a series of square or rectangular shapes stacked together.

Shell construction allows builders to use concrete with a more artistic flair.

Shell concrete structures are not only beautiful but strong. This technique fell out of popularity decades ago, but it is making a strong comeback.

Shell concrete is an engineering marvel that many contractors shy away from because they think it is too complex. However, if you are looking to make a unique statement with your next concrete project, concrete shell construction could be your answer.

This article will cover the ins and outs of shell concrete, the various types and forms, and how they can be used in your next building design.

What Is Shell Concrete?

According to the ACI, the definition of shell concrete construction is as follows:

“Three-dimensional spatial structures made up of one or more curved slabs or folded plates whose thicknesses are small compared to their other dimensions.

Thin shells are characterized by their three-dimensional load-carrying behavior, which is determined by the geometry of their forms, by the manner in which they are supported, and by the nature of the applied load.”

Basically, shell constructions are thin slabs of curved or folded concrete that form a three-dimensional structure.

These structures are much lighter than traditional concrete constructions. Because they are made from reinforced concrete, they are also resistant to compression and much stronger than they look.

Just as shells in nature get their strength from their curvature (i.e., seashells, turtle shells, nut shells, and the human skull), shell concrete looks delicate but isn’t.

Related: Everything You Need to Know About Concrete Walls

The History of Shell Concrete 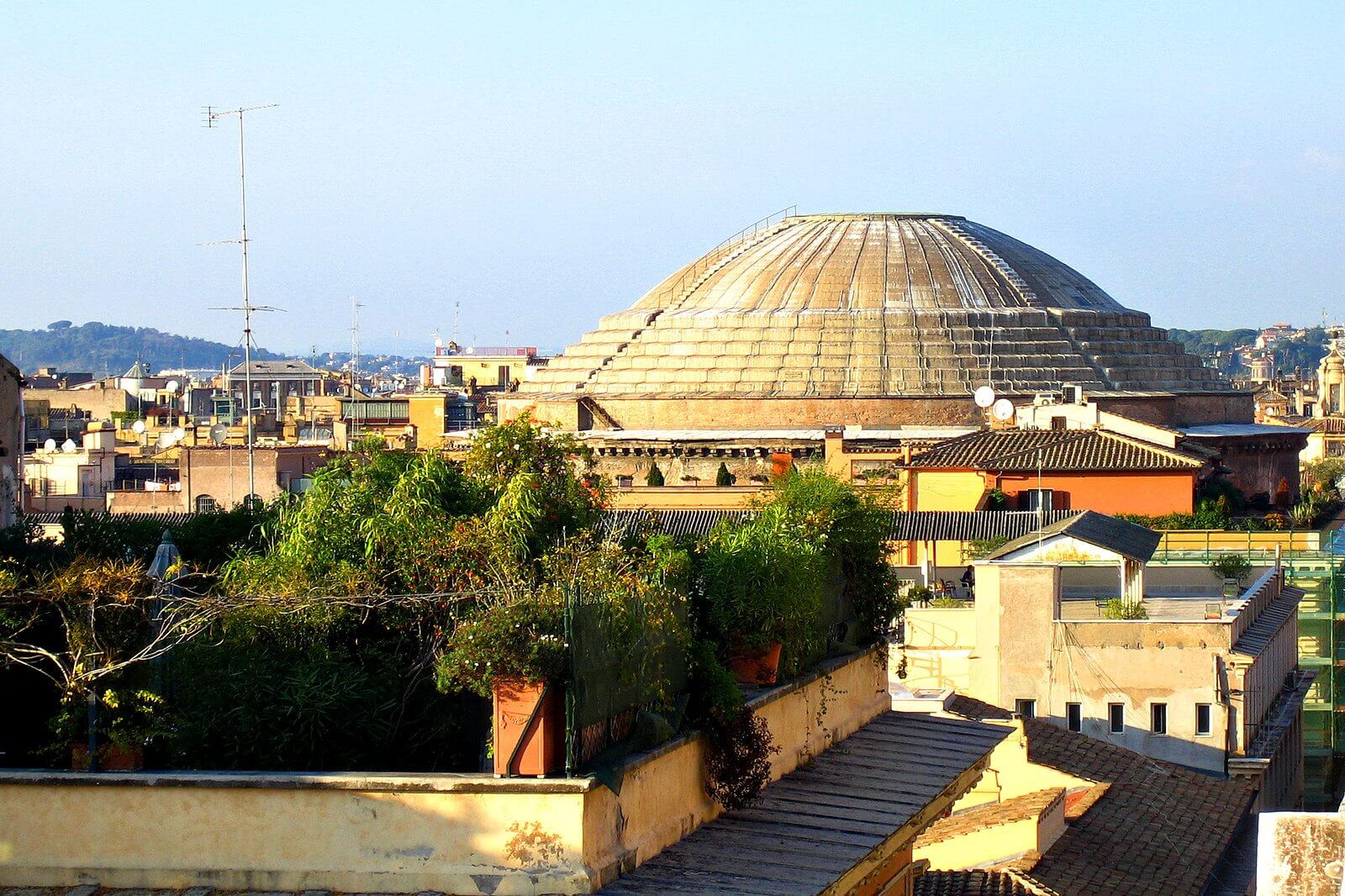 The Pantheon in Rome is one of the oldest and most well-known shell concrete structures. The roof is a large concrete dome (seen above).

This structure stands to this day, a testament to the stability of shell concrete.

In more modern history, four major architects and engineers had a hand in the shell concrete movement. They all had much optimism about this type of structural design.

Pier Luigi Nervi was an Italian who constructed the Orbetello aircraft hangar and the Cinema Augusteo in Naples.

He designed the George Washington Bridge bus terminal in New York City, and he invented Ferro-cemento, a process that uses thin, flexible steel mesh as a core to thin-shell concrete.

Eduardo Torroja was a Spanish engineer who built the Algeciras market in Spain.

Felix Candela was Torroja’s pupil, famous for his use of hyperbolic paraboloids. He brought this type of architecture to Mexico.

The Monolithic Dome is an important historical development in concrete shell construction.

David B. South is the father of monolithic domes. He created his first in 1976 with the help of his brothers and patented the process since it worked so well.

Today there are hundreds of monolithic dome homes, churches, sports facilities, and storage facilities across the country.

How Shell Concrete Is Engineered

Shell construction is an innovative use of concrete, using the material’s adaptability to the greatest advantage. When constructing shell concrete, contractors use fine aggregates to make a lighter version of the material.

This method uses inflated forms made from fabric. Reinforcement bars are applied around the form, and the form is sprayed with plastic foam for added structure.

It is then sprayed with shotcrete on the outside using pneumatic pressure.

Air form construction is used only for curved forms, such as domes, barrel vaults, and the like.

In this method, mesh is used to create the form.

The first layer of concrete is spread on and dried. The remaining layers are added to achieve the right shape and shell thickness.

These flat concrete plates are bent with the help of an inflated cushion and the tensioning of a tendon attached at the circumference of the shell.

Structural concrete shells use different construction techniques to create the shape of the shell.

There are several types and shapes that can be created with thin-shell concrete:

We’ll discuss each of those types below:

Folded plates are thin, flat slabs joined along their edges. Within this group are three sub-types:

Prismatic folded plates are created when multiple slabs are joined together in a semi-cylindrical manner with hard edges.

Non-prismatic folded plates are created when slabs are joined together in a zigzag pattern, similar to a folded piece of paper.

Multiple triangular or polygonal slabs joined together at the edges to form a multiplanar shape are called faceted folded plates.

This site has some great examples of folded plate structures to see and breaks down the construction process well.

A barrel vault is an arched structure supported by columns or walls on both sides. It resembles a cylinder cut in half lengthwise.

The load on these shells is carried both longitudinally and transversely, adding to their strength.

Short shells are a shorter version of the barrel, but they can have a wider radius.

These shells are usually supported by edge beams, a stiffener, and a lower abutment to increase the strength of the structure.

Perhaps the most famous type of shell structure, domes are large, circular hemispheres. This is also the most popular type of shell roof for a large, open building.

Domes are found all over the world.

Folded plate domes are similar to faceted folded plate structures but are assembled in a circular shape.

A translation shell is a dome set on four arches. There is increased tension in the four corners to add strength.

There are two main types of warped surfaces: conoids and hyperbolic paraboloids.

A conoid is a shell with one curved edge and one straight edge.

Hyperbolic paraboloids are concave on one axis and convex on the other.

It is possible to combine multiple types of thin-shell concrete structures together in the construction process.

Shells with curved surfaces distribute the stress or load across the entire shape, increasing their weight and pressure tolerance.

Concrete shell structures have survived earthquakes and are believed to be strong enough to withstand an F5 tornado. This is a highly flexible building material with quite a lot of tensile strength.

The use of shell concrete serves a very specific set of parameters. Shell concrete has its limitations but works phenomenally when used for the right projects.

Shell concrete has a better strength-to-weight ratio than traditional concrete construction. This enables it to provide more compressive strength than regular structures.

Shell structures also make it possible to cover a large-span open area without support beams. These structures make for beautiful works of architecture.

Shell concrete construction can also undergo a greater seismic load due to its tensile strength, which makes it a good choice when building in areas with frequent earthquakes.

Shell concrete elements can be cast in place or precast off-site if weather causes a problem.

The most significant limitation of shell concrete is that you cannot use it to construct multi-story buildings.

Although technology and new methods are improving the situation, shell concrete construction is still labor-intensive work that many contractors shy away from due to its sheer impracticality.

It’s easy to look around at modern architecture and see the benefits of shell concrete construction.

Here are just a few examples to consider:

Australia’s famous Sydney Opera House is one of the best examples of the visual effect that shell concrete can create.

Jorn Utzon designed this building in the 1950s, stumping the engineers who were responsible for fabricating his vision.

To bring his ideas into reality, Utzon came up with “The Spherical Solution,” which is used to build similar structures to this day.

Although designed to resemble the lotus flower, the Baha’i House of Worship uses many of the same shapes and architectural elements.

It uses a double-layered interior dome as its innermost ceiling, with ribs connecting each concrete shell.

No doubt, the fact that it is a breathtaking piece of architecture contributes to it being one of the most widely visited places of worship in the world.

At an IASS meeting with his contemporaries, the five architects at the beginning of this article, Isler presented three new shell designs.

He called these designs the freely-shaped hill, the membrane under pressure, and the hanging cloth reversed.

He also designed some unique free-form shells that he is well-known for, including the inverted membrane and bubble shells.

There are specific uses and types of structures for which shell concrete construction can be a perfect choice. Many large athletic and convention arenas utilize this method for obvious reasons.

Certainly, this construction method requires more thought, labor, and precision, but the results are breathtaking.

For a building that leaves a lasting impression, consider shell concrete construction an integral part of the design.